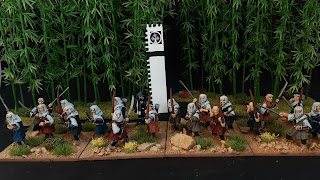 Email ThisBlogThis!Share to TwitterShare to FacebookShare to Pinterest
Labels: Monks 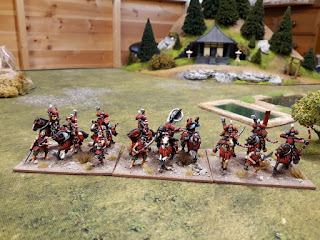 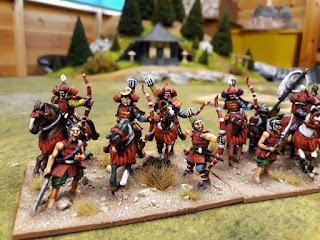 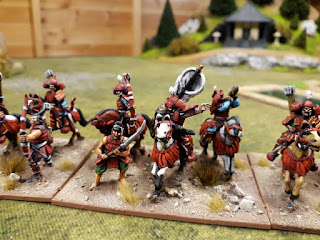 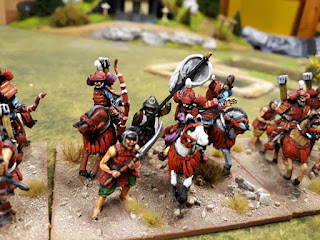 Westwind and Perry Miniatures
Posted by Raglan at 11:37 15 comments:

Email ThisBlogThis!Share to TwitterShare to FacebookShare to Pinterest
Labels: Mori 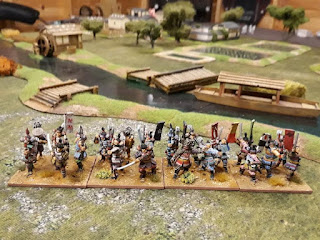 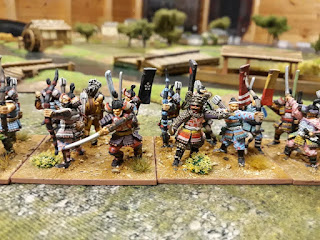 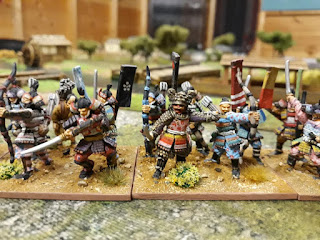 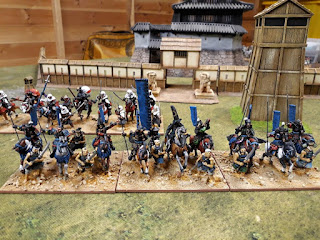 Katō Kiyomasa was a military man first and last, outlawing even the recitation of poetry, putting the martial arts above all else. His precepts show the single-mindedness and Spartan attitudes of the man, they demonstrate emphatically that the warrior's first duty in the early 17th century was simply to 'grasp the sword and die'. Contemporary accounts of Katō describe him as awe-inspiring, yet not unfriendly, and a natural leader of men. 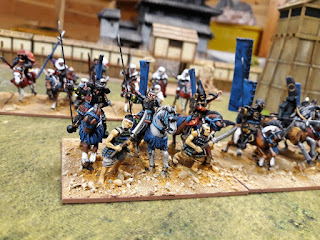 Kiyomasa was a renowned castle-builder. During the Imjin war he built several strategic Japanese-style castles in the territories he conquered. Ulsan castle was one of such fortresses and the site of Kiyomasa's most famous battle — the Siege of Ulsan on December 22, 1597. Kiyomasa led the defense of the castle, successfully holding at bay Chinese general Yang Hao's army, which numbered 60,000. He defended the castle until November 23, 1598. However, his bravery was not reported to Hideyoshi by his rival and superior Ishida Mitsunari. Hideyoshi recalled him to Kyōto. After Hideyoshi's death, Kiyomasa clashed with Mitsunari, and started approaching Tokugawa Ieyasu. 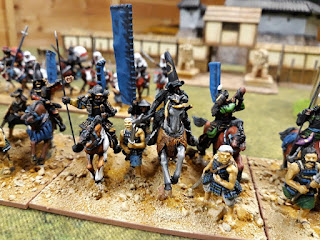 During the Battle of Sekigahara, Kiyomasa remained in Kyūshū. Believing that the Toyotomi would fall without the help of the Tokugawa (and the hatred he had of Ishida Mitsunari commanding the Toyotomi forces), he sided with the eastern army of Tokugawa Ieyasu. For his loyalty to the Tokugawa, Kiyomasa was rewarded with the former territories of his rival Konishi (who had sided with Ishida), which when added to his existing territory, increased the Kumamoto domain to around 530,000 koku.
Posted by Raglan at 14:07 26 comments: 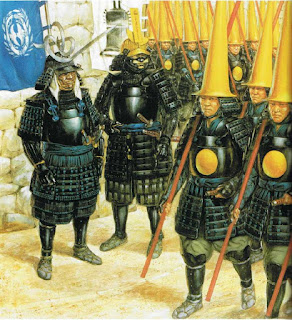 In the mid-1550s, the Imagawa, Hojo, and Takeda clans met at the Zentoku-ji temple in Suruga province and established a peace treaty. The proceedings were moderated by a monk named Taigen Sessai. The three daimyo agreed not to attack each other, as well as made agreements on support and reinforcements if necessary. This agreement was held together by three marriages - Hojo Ujimasa married the daughter of Takeda Shingen (Obai-in), Imagawa Ujizane married a daughter of Hojo Ujiyasu, and Takeda Yoshinobu had already married the daughter of Imagawa Yoshimoto in 1552, further strengthening ties between the Takeda and the Imagawa. Due to these agreements, the three daimyo were able to focus on their own goals without fear of attack.
This peace treaty laid the foundation for Imagawa Yoshimoto to focus on the Oda clan in Owari, and attempt a move on Kyoto. The Hojo clan benefitted by being freed up to expand their own influence in the Kanto, and Takeda Shingen was able to focus on his invasion of Shinano province.
The Japanese name of the alliance, 甲相駿三国同盟, literally means "Alliance of the three provinces of Kai (Takeda), Sagami (Hôjô), and Suruga (Imagawa)."
If Imagawa Yoshimoto had not made peace with the Hojo and Takeda, he may not have invaded Owari in 1560 to be killed by Oda Nobunaga. Had that not happened, the entire history of the Sengoku may have changed completely.
Posted by Raglan at 14:07 3 comments:

Email ThisBlogThis!Share to TwitterShare to FacebookShare to Pinterest
Labels: History 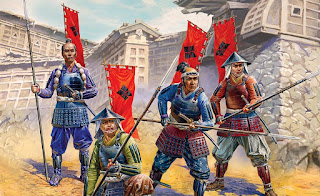 The Takeda was a famous clan of daimyō (feudal lords) in Japan's late Heian Period to Sengoku period. The Takeda were descendants of Emperor Seiwa (850-880) and are a branch of the Minamoto clan (Seiwa Genji), by Minamoto no Yoshimitsu (1056-1127), brother to the Chinjufu-shogun Minamoto no Yoshiie (1039-1106). Minamoto no Yoshikiyo, son of Yoshimitsu, was the first to take the name of Takeda.

In the 12th century, at the end of the Heian period, the Takeda family controlled Kai Province. Along with a number of other families, they aided their cousin Minamoto no Yoritomo against the Taira clan in the Genpei War. When Minamoto no Yoritomo was first defeated at Ishibashiyama (1181), Takeda Nobuyoshi was applied for help and the Takeda sent an army of 20,000 men to support Yoritomo. Takeda Nobumitsu (1162-1248), helped the Hōjō during the Shōkyu War (1221) and in reward received the governorship of Aki province. Until the Sengoku period, the Takeda were shugo of Kai, Aki and Wakasa provincies. In 1415, they helped to suppress the rebellion of Uesugi Zenshū; Ashikaga Mochiuji, Uesugi's lord, and the man the rebellion was organized against, made a reprisal against the Takeda, thus beginning the rivalry between the Uesugi and Takeda families, which would last roughly 150 years.

Takeda Harunobu succeeded his father Nobutora in 1540, becoming lord of Kai, and quickly began to expand. Though he faced the Hōjō clan a number of times, most of his expansion was to the north, where he fought his most famous battles, against Uesugi Kenshin.

Shingen is famous for his tactical genius, and innovations, though some historians have argued that his tactics were not particularly impressive nor revolutionary. Nevertheless, Shingen is perhaps most famous for his use of the cavalry charge. Up until the mid-16th century and Shingen's rise to power, mounted samurai were primarily archers. There was already a trend at this time towards larger infantry-based armies, including a large number of foot archers. In order to defeat these missile troops, Shingen transformed his samurai from archers to lancers, and used the cavalry charge to devastating effect at the Battle of Mikatagahara in 1572. The strength of Shingen's new tactic became so famous that the Takeda army came to be known as the kiba gundan, or 'mounted army.'  Shingen died in 1573, at age 53, from illness. His less tactically talented son, Katsuyori, succeeded him, and was defeated in 1575, in the famous battle of Nagashino, by Oda Nobunaga. 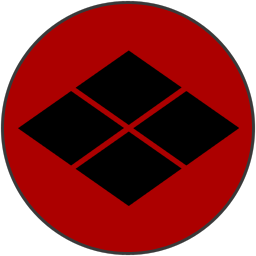 A connoisseur of finely painted 28mm wargames miniatures and terrain. I am a historian with particular interest in battlefield tactics and the psychology of warfare.